Posted by Savannah, Year 5 and edited by Lieve, Year 5 | Found in: Primary 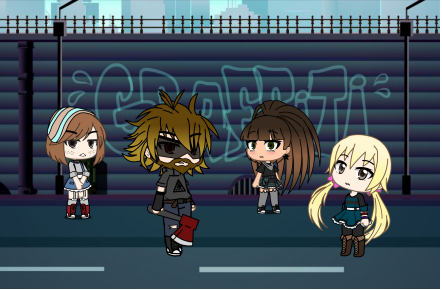 WARNING: This is a gruesome horror narrative recommended for upper primary and high school students only!

One normal night I was with my friends at my uncle’s house. It was misty, dark and there was a blood moon... it had been three hours since our parents had dropped us off.

9:30pm: We made a decision to walk home which was a very, VERY bad idea. Two hours later, half way home in the dark, my phone was dead and nobody had service... Not knowing where we were, we saw a red truck pass us. “120,” said Emma. *sigh*

The man looked at us with a grin, “Why of course, and if you don’t mind I could take you home,” he said with his voice cracking as if he had something planned...

We went into the car, all three of us and his phone died.
“Whoops,” he said, looking at Emma. “Oh well I’ll just have to guess where you live then,” he chuckled.

12:00pm: the man parked on the side of the road near a cliff, Amy starting to get worried, looking at the man leaving the car to retrieve an unknown item. Amy looked at the back of the car only to find... A BLOODY AXE WITH A YOUNG GIRL'S HREAD! Amy opened the door and started running. We followed terrified by the man now CHASING US TOWARDS THE CLIFF! Aliza fell...and as the man ran closer to her, he swung his axe...I ran to help but saw his phone on 10% I picked it up and then...Aliza was gone. I ran down crying, I saw him running faster and FASTER! The closer he got, the more I neared the cliff... I noticed a glass bottle on the ground, I picked it up and smashed it on the ground, “S-stay BACK!!” I yelled.

He laughed as he came closer, “You wouldn’t, you pathetic child, you couldn’t even save your friend! HA! You think you could kill me! You’re dreaming! And soon you will be asleep for a VERY VERY LONG TIME...”
I walked forward and looked him in the eye...and...stabbed him in the heart. He fell to the ground, I looked behind me. I saw Amy and Emma staring at me.

“ALIZA!” Emma yelled, running up the street only to find Aliza’s dead body laying silently on the ground. (The phone!) I picked up the phone, it had no password. I quickly called 000 and waited for the police and ambulance. Unfortunately Aliza had passed for she had been headless, and the man was dead on the ground with shock on his face. I stared and grinned evily.

The man was a serial killer with a $90 000 bounty. We split the money between all of us... all of us except Aliza...Not every story has a happy ending, but the main ideas of the story is...never go in a stranger’s car and beware of...stranger danger!