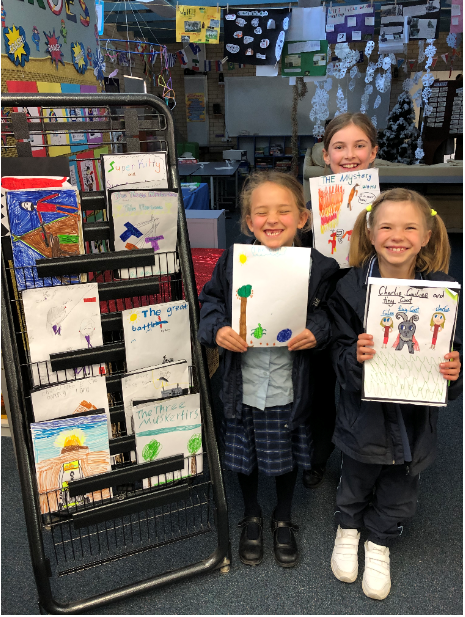 The Year Three students created colourful narratives, which are now displayed on a bookshelf in their classroom for everyone to read.

Their theme this term was 'Superheroes' so they were asked to write a narrative with a superhero, and also include at least one animal since they learned about animals last term.

Here is one of the stories, written by Cailee, called 'Super Kitty and Super Arctic Fox':

One cold day at the Arctic, two Arctic foxes were walking together. Their names were Anna and Emily. All of a sudden Anna saw a crack in the snow.
“Look out!” yelled Anna, but she was too late.
Emily fell onto a rock straight above lava! The rock cracked. Anna jumped onto a rock near Emily and held out her paw. Emily grabbed Anna’s paw just in time.
“Thanks,” said Emily, but she was slipping.
Emily fell and Anna howled. SWOOSH! Super Kitty grabbed Emily and put her safely on the snow. Anna climbed onto the snow.
“Thank you for saving my friend,” Anna said.
“You’re welcome,” said Super Kitty.
“I know,” said Emily, “Let’s be friends.”

All the way in Asia a black shadow of a tiger appeared. Then there was a humungous roar! The roar spread through Asia in seconds. All the pandas and monkeys and elephants fled.

Back at the Arctic, Super Kitty, Anna and Emily found themselves right next to the ocean. Then they heard a bunch of noises. In a small canoe there was an elephant, a monkey and a panda, all paddling as fast as they could.
“What’s wrong?” asked Anna.
“It’s a tiger,” stammered the tired panda.
“Come and have a rest and tell us all about it,” said Super Kitty.
“A tiger took over the Asian forest and now we have nowhere to live!” said the elephant.
“A tiger,” said Super Kitty, That’s easy.”
“Oh no,” said the monkey, “He’s so strong that he can push over a tree!”
“Wow!” said Emily. “All we have to do is make him tired.”
“Well, let’s go!” said Super Kitty.
“All hop in,” said the panda.
The elephant jumped in SPLASH! The boat broke.
“I’ve got another idea,” said Super Kitty.
The elephant was big enough for everyone to sit on so he was the boat. His legs were paddles and he swam across the ocean. Soon, they reached Asia.

“Well, well, well,” a mean voice came from a shadow. “So you’re Super Kitty?” A tiger crept out of a bush. “I’ve always wanted you as a prisoner.”
All of a sudden a cage fell around Super Kitty. He was trapped!
“Run!” yelled Super Kitty.
Anna and Emily ran.
“We need to help him,” said Anna.
“I know, we need to grab the key in Tiger’s pocket and unlock the cage,” said Emily.
“I’ll get the key because I’m sneaky,” said Anna.
She crept out but Tiger saw her.
“Trap her!” yelled Tiger.
Poor Anna. Emily shot out, cages falling from the sky. She dodged all of them. Tiger stamped his foot and a crack separated Emily from her friends. What should she do now? Then she remembered how Super Kitty saved her. She knew she had to become a superhero. She jumped over the crack.
“Get her!” yelled Tiger.
He was talking to the cages, she thought. She snatched the key and ran to the cage with Super Kitty and Emily in. She unlocked the cage as fast as she could.
“Stop them!” screamed Tiger, but now they were in an area with no cages.
“Oh dear,” said Tiger and jumped into the ocean.
“Thanks for saving us,” said Super Kitty. “Well, bye, I’ve got to save the world.”
“Bye!” said Anna and Emily.
Super Kitty flew away.