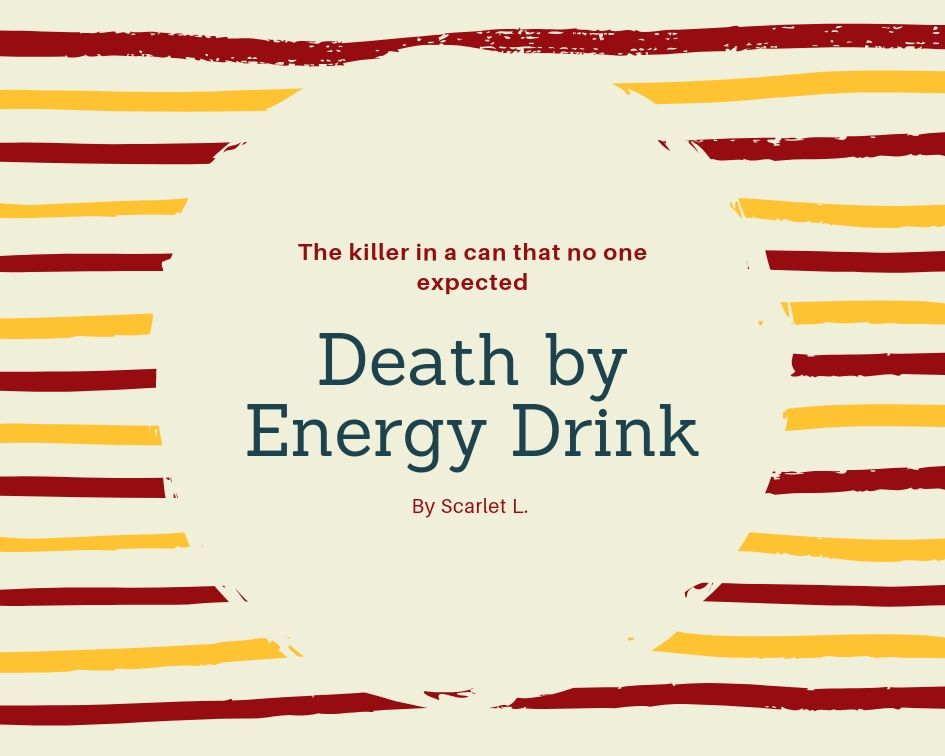 “Beep” goes the heart rate monitor by your hospital bed after your heart gives way due to your love and consumption of energy drinks.

This scenario may sound funny at first, but unfortunately, it’s the reality for many teens and young adults.

In the United States alone, energy drinks are amongst some of the most popular supplements and beverages. According to America’s National Centre for Complementary and Integrative Health, “1/3 of teens between 12-17 drink energy drinks regularly.” This puts a third of teens at a higher risk of cardiovascular problems and a higher risk of obesity, which is something that governments around the world are trying to combat. Yet they don’t seem to be doing all that much to help win the war against energy drinks or prevent more unnecessary deaths linked to energy drinks.

As of recently, six deaths in America are being investigated by the FDA. These six deaths alone appear to be closely linked to the consumption of the overly caffeinated killer known as Monster Energy. This popular and slightly overrated, energy drink contains an excessive and ridiculous amount of caffeine, 240mg to be exact (the larger of the two serving sizes). To put this in perspective, that’s seven times the amount of caffeine in a 350mL can of soft drink. Monster comes a 700mL can, this means the serving size is already double that of a standard can of soft drink. Basically, the odds are stacked against you.

As of last October, a wrongful death suit has been filed in California by the parents of a 14-year-old girl who met her maker after she consumed two cans of Monster Energy Drink in twenty hours. The autopsy report concludes that the girl passed away due to cardiac arrhythmia caused by caffeine toxicity. It was also noted in the report by the examiner that the girl had a disorder and it was possible that the disorder weakened her blood vessels.

As the death toll rises, Swedish authorities warn that consuming energy drinks such as Red Bull with alcohol or after exercise can kill you. This follows reports that at least three people have died with connections to drinking Red Bull. Two of the three people died after mixing the overhyped can of carbonated chemicals with vodka (sounds like a pretty disgusting combination if you ask me). Unfortunately, a third-person
received his wings to the afterlife courtesy of Red Bull due to drinking a few cans of Red Bull after an intense workout at the gym. “If you drink a lot of Red Bull, if you are dehydrated and mix it with alcohol, it can be very dangerous.” -Dr DanAnderson.

Which energy drinks are the most popular?

It’s crazy to think that people are still drinking energy drinks after all the recent deaths associated with the sickly sweet killer. What’s worse is that they don’t seem to actually care. In fact, the situation just seems to be getting worse. As of 2014, the global energy drinks sales have reached over AUD 73.7 billion (reports from beveragedaily.com), a 5% increase on 2013 sales. Energy drinks are apart of the lucrative beverage industry and unfortunately for doctors and families, consumers have been purchasing more cans of the glorified caffeine and fewer cans of soft drinks. The two most popular energy drink brands are Red Bull and Monster Energy. They are quite similar in ingredients and “nutritional contents”, both containing 110-120 calories and 75-85mg of caffeine. Red Bull is sold in 167 countries and Monster is sold in 114 countries.

Your average instant coffee contains 60mg of caffeine and an average coffee (with whole milk and one sugar) contains 60 calories, half the amount the Monster Energy has. So why would anyone voluntarily drink the fizzy, fattening and sickly sweet beverage that Monster energy and Red Bull are, over a nice, warm and comforting cup of coffee? It honestly beats me.

All the health risks associated with energy drink consumption

Imagine you’re a young, fit and loyal energy drink consumer who loves the rush of energy they receive from drinking a 250mL can of Red Bull, simple right? Well, it’s not as simple as you might think. Research shows that drinking a few energy drinks can be linked to serious and longterm health risks such as tooth decay, increased blood pressure, liver damage and much more! Gross! Who would want to ruin their body for a beverage that isn’t even that good?

Although the small list stated above won’t deter people away from drinking energy drinks, there are a few more health risks which can be more serious. Calcium deficiency, sleep disorders, obesity, cardiovascular issues, caffeine overdose(life-threatening), withdrawal symptoms from caffeine, headaches and caffeine intoxication-which was what killed the young girl in California.

The unfortunate reality is that the energy drink industry is too large and beneficial to consumerism and the economy for large government bodies to change anything. They will do the bare minimum by printing “not recommended for children, do not drink more than two cans a day” and call it a protest against energy drinks. So if the government won’t change the culture surrounding energy drinks, then as consumers, we should. Too many young people have died not knowing that consuming energy drinks could harm them and too many people have now got life-threatening health issues due to energy drinks such as Red Bull and Monster Energy.