Why our Modern Society is Making Teens more Depressed

Posted by Anonymous | Found in: Secondary 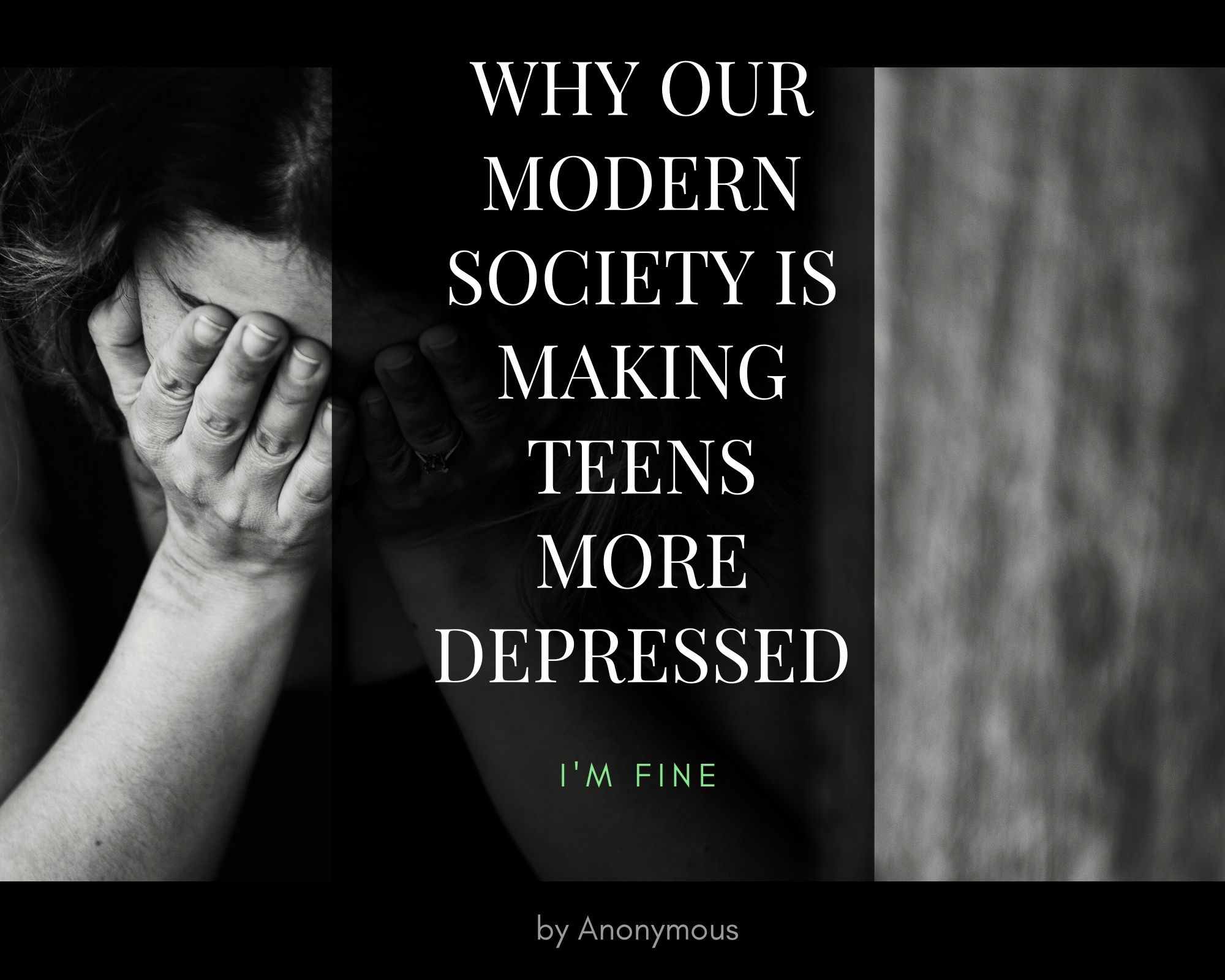 Are you slowly watching the seconds past, waiting for a message from who you might call a ‘friend’ from Facebook?

Or did another comment just come through from that cute photo you just posted? Or maybe you clicked a link on Instagram which bought you here. Either way it seems like now day that social media is never too far from us, which is playing a big role in the way we think, feel and act.

Sarah Rose Cavanagh argues that we shouldn’t relate depression to social media just yet, saying “My suspicion is that the kids are gonna be Ok.”

But are they really gonna be ok?

In the past 25 years depression has risen by 70%, with 91% of teens using social media. The endless thoughts that goes through many teenagers’ minds, I’m so fat, I’m so ugly, I’m nobody compared to her, no one will want me. Constantly scrolling. Constantly comparing. Constantly wondering what it would be like to be that perfect, to be that skinny, to have that many friends, to be that rich. Post after post containing unrealistic information portraying the image of ‘perfection’ to users on social media, making them question their body image and their life impacting their self-esteem.

Now what you have is depression in teenagers, who have low self-esteem, are constantly isolated from the real world, bullied, concentration disrupted, fearful of missing out and peer pressure to be that ‘perfect’.  Let’s talk about another way that society is increasing depression in teenagers. This of course is the constant pressure the society puts on teenagers to get high marks in school. Teenagers can’t be teenagers anymore as they are constantly pressured into performing well so they can get the best scholarship or so they can get into the best prestigious schools.

The University of Monash interviewed a straight A student on how she is actually going. She looked fine from the outside, I mean she is a straight A student. This is what she said “I am constantly depressed. I have no time for anything that makes me happy. I have an eating disorder. I  have sleep problems. I have a job that is constantly making me exhausted and I am getting to breaking point."

We constantly hear from teachers, principals, parents and society that you should have a balance of schoolwork and personal time. Messages of go hang out with your friends', 'go chill and listen to music', 'go watch a movie',  'go play some sports' and 'do the things that make you happy', but at the end of the day we still have pressure to do well at school. Reality is that the level of expectations and pressure the society puts on teenagers to do well in school is so high there is no time for teenagers to do the things that makes teenagers happy.

According to the Atlantic Newspaper "49 percent of students said they had a great deal of stress and feel unhappy on a daily basis, half reported doing three or more hours of homework per night, and 26% noted that they have been diagnosed with depression". Is this a society where you want your teenagers or your kids growing up in? Of course, teenagers need a bit of stress to do well, but this much stress is unhealthy and needs to change.

The combination of stress and pressure is not only making teenagers depressed but is leading to other health problems. Here's just a few of the major health problems in teenagers, sleep deviation, eating disorders, anxiety and even the consumption of drugs and alcohol.

The night is silent and all I can hear are the hands constantly ticking on my clock beside my bed. I keep telling myself it's only another minute I will get to sleep eventually. I look at the clock, it's now 3am and I have been constantly tossing and turning all night, not been able to turn off my mind. Constantly thinking about that assignment, I still yet to complete. That test I’m probably going to fail tomorrow. That exam that is only in 2 weeks’ time. Oh yeah also, that 7-hour shift that I have tomorrow night.

Sleep problems are very well known in teenagers, Victoria State Government says, “Teenagers need 9-10 hours of sleep per night”, but the reality is that teenagers on average only gets “6-7 hours of sleep per night” which was scientifically proven by Dr. Teng. With sleep problems impacting teenager’s health dramatically even causing depression. Again, what’s the society doing to help that? The society is doing nothing as many people believe that “teenagers are gonna be OK”.

Research from Disease control and National Institute of Drug abuse showed that “1 in 5 teenagers have abused prescription medicine and 21% of high school teenagers have used marijuana, this has increased by 10% since the 1990”. There is a clear link that teenagers are resorting to drugs and/or alcohol to try and cope with depression. Sure, there’s helplines there’s councillors but the truth is this isn’t enough and how many teenagers are really getting help?

The society needs to do more to help teenagers who are suffering from depression, this is a serious matter that is going to affect all of us in the future if we don’t do anything to change it.

Now the real question is, are teenagers really gonna be OK?